Click Here to Go to the Victory Series NSS Forum 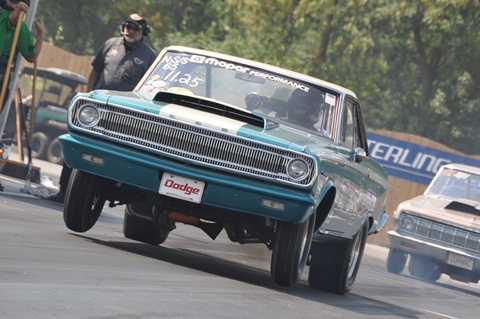 2009 Victory NSS Champion Tommy Mitchell
Tommy has been involved in Mopars since he was a young boy. He helped his father Tom Mitchell Sr. test drive the cars in front of his childhood home. This second generation drag racer now has two daughters and works driving a dump truck and selling vintage auto parts. He continues to race and carries on the tradition that his father started with his daughters.
First assembled and raced in 1988 by Tom Mitchell Sr. with Tommy's help, the Dandy Dodge hasn't missed a season since. This 1965 Dodge Coronet is powered by a 440 block with Max Wedge intake and carbs. The Dodge utilizes a Torqueflite transmission and Chrysler 8.75 third member with a 4.10 Sure-Grip. In 2003 the car was dedicated to Nostalgia Super Stock Racing only. The roll cage and suspension were then updated by Baumgartner Race Cars. The memory of Tom Mitchell Sr. will carry on through Tommy and the Dandy Dodge.